STEREO LOVE BRINGS "FAMILY" BACK TO ROCK AND ROLL

The Dad behind the music: JUDD STEELE 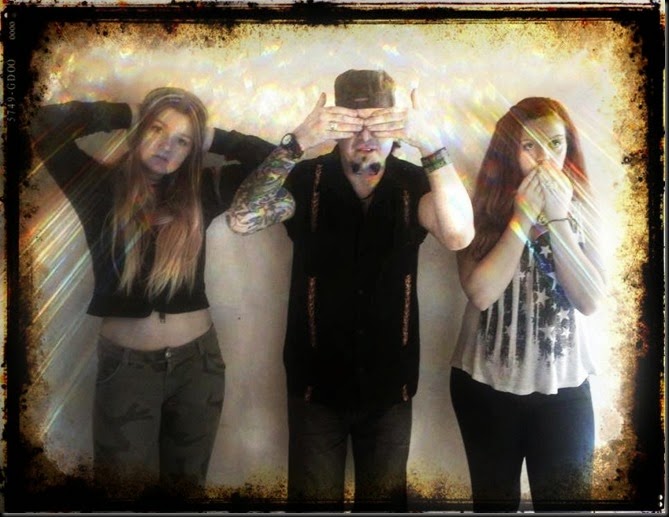 First getting my attention last fall through production work and video by a friend in real life, and Facebook, Foni (Live Guerillas Entertainment), I began becoming intrigued by STEREO LOVE. When I was presented with the opportunity to meet them for the first time face-to-face at NAMM, I was beyond impressed with the professionalism sisters Jewel and Lula showed. I decided then to see them play live on a Sunday at DiPiazzia's in Long Beach at a show put together by George Rindfleisch. It was fantastic; I can't wait for you to meet them too... 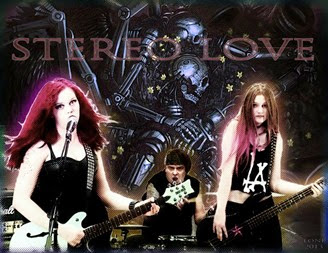 STEREO LOVE, based out of Studio City, Calif., is a family trio that simply loves to rock n' roll. The band members Jewel Steele on lead vocals & guitar, Lula Steele on bass and back-up vocals, and their father, Judd W. Steele on drums/bodyguard and feelin' 18.

Jewel Steele picked up the guitar when she was 9 years old and has been playing non-stop ever since. Jewel began performing in public the Summer of 2010 on her local street corner. Jewel is endorsed by Daisy Rock Girl Guitars and she also rocks the violin and drums too. 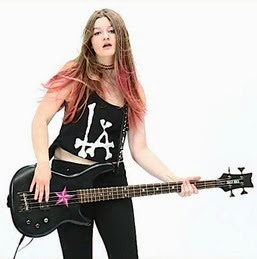 Lula Steele picked up the bass guitar when she was 10 years old. Influenced by her jazz musician Grandfather, Lula also plays Upright Bass and was the only female bass player in her middle school orchestra. Lula is also endorsed by Daisy Rock Girl Guitars and loves to “thump da bass” every time she gets a chance.

Judd Steele brings years of playing drums to the table. Judd has toured for the troops, playing in Afghanistan and other destinations around the world. Looking for a fun family activity to do together, Judd being a rock and roll dad, decided to start a band with his two daughters, and in that moment, a 3-piece made in heaven came into being. Judd plays Premier, English made drums, like his father, Judd Sr., did. 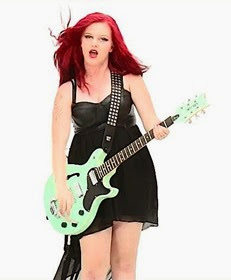 When was the first time you and the girls performed?

JS - It was at Jensen's Music, Girls of Rock Night, in Santa Barbara. The girls were just 10 and 11 years old. The show was fantastic and the girls learned they loved to play in front of a live audience and I got a chance to back them up on “dem drums”, lucky me, Five years later, and STEREO LOVE is still going strong. The band played 37 live shows in 2013, all the way from San Diego to Santa Barbara and out east to Las Vegas. Venues include clubs, bars, schools, festivals, fundraisers, parks, street corners, where ever we can play without getting arrested. Over 21 clubs will let the girls come on stage before 10pm to rock their set, then they have to leave, but at least they got to perform. 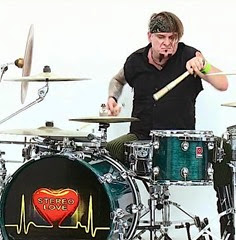 Where do you pull your inspiration from?

JS - Of course, within myself and definitely from my kids for sure! My wife really likes and listens to stuff from the 60s and 70s and I was a hair band guy from the glam rock days in the 80s. So our tastes include everything from Elvis to Kix to Janis Joplin to Enuff Z'nuff. Jewel personally likes Lita Ford, Joan Jett, Orianthe and Grace Potter. She listens to many types of music from Stevie Wonder to the Foo Fighters, Goo Goo Dolls, Green Day, Katie Perry and more up to date young people music that never gets played on the radio. And Lula, she really digs bass player Steve Harris from Iron Maiden and Flea from the Chili Peppers. Lula tends to like heavier music and riffs and listens to anything from Paramore to Lorde and she also enjoys rap too. Me, I am influenced by Tommy Lee, Buddy Rich and of course my jazz drumming father, Judd Sr. My dad was a real musician; he toured in the 40s and 50s with a group of guys and played standards at famous hotels and casinos. He was on the road for 16 years. In 1985, my dad took me to see Buddy Rich play and this this guy was a real showman and his performance has always stuck in my mind. I bet Tommy Lee got some moves from him.

So Dad, Who does the songwriting?

JS - Jewel and Lula both write the songs and some of the songs they work with a co-writer, a good friend of mine who is wildly talented and has been doing it a long time. He shares his experience with the girls, which is priceless. The remakes we play are how we express ourselves and they are played in our own style. Some people tell us that we do it better than the original artist, and we always love hearing that! Or other people will say, is that an original?

What has been the biggest moment for "Stereo Love" as of now? 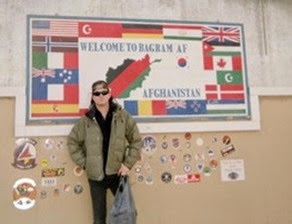 JS - This would be winning the Vegas Rocks Music Awards 2013, hosted by Miss Sally Steele, the rock n' roll Goddess of Vegas. STEREO LOVE won the 'Hollywood Rocks' category and Jewel just happen to win a Dean Guitar in a raffle at the same time, signed by many a rock star who were performing that night. STEREO LOVE was rolling in Vegas! The band actually won by our fans voting for us. We are still riding high from this award and have met so many wonderful people who want to help us with our music endeavors.

How do you describe your music? How close are your lines of reality and music drawn?

JS - Our music is all over the place... from blues to pop to alternative to heavy. We just try to stay away from politics and religion and keep it upbeat and positive. As far as how close our music is to reality... I personally have been around the block a few times but my girls are still so young, and they are really are untainted at this point in their lives. Neither one has even had a boyfriend yet. And I like it like that. Of course, they usually have crushes on the same guy. (Btw, did I mention I bring my Louisville Slugger to every show?) Original songs like 'My Perfect Date' is just simply Jewel being sarcastic in her own dream world, she can't even drive a car yet. 'Straight Up' are past crushes that lasted a “Nano Second”. Other songs like 'What do You Want' and 'You're A Star' are down tuned to drop D and these songs make the girls feel incredible, like they are invincible, plus they love the way the crowd responds to these tunes. 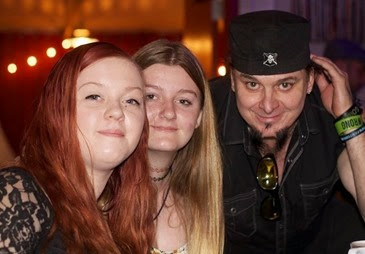 What is it like raising two teenage daughters in music?

JS - It is a lot of fun raising 2 teenage daughters in the music business. I am around them all the time so I can keep my eye on them, and I like that. This is the first band that I have ever been in, when I tell them it is bed time, they listen to me (he laughs). The only set back is that they won't let me have a microphone. And every time I start to talk, they tell me "shut up and rock". I feel very blessed, like I have re-invented myself as a musician. I also like that I am more popular at their high school than they are. They definitely make me feel 17 years old again. 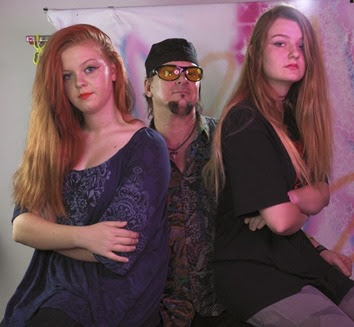 What musical influences did you make available to them on an ongoing basis?

JS - When Jewel and Lula were 9 & 10 years old, we stopped in Guitar Center for something for me and my drums. Well, they of course ditched me and headed for the guitars. When I was done doing my business, I headed downstairs and heard this noise, sounding like it was almost music. It was Lula and Jewel, messing around on guitar and bass, doing their own thing and at that moment, I could tell they definitely had a knack for music and showmanship. They really had no fear and they were playing their hearts out like they were rock stars! And here we are now, 6 years later, with endorsements and still moving forward.

Our favorite song written to date is 'What Do You Want'. This song is about going to the top, playing arenas, a dream of STEREO LOVE's.

Our next show is in our home town at Universal Bar & Grill on April 25th. We will also be playing the 41st Annual Topanga Days in May, Fiesta Days in Santa Barbara in July and Summerfest in August with a lot more shows in between. Check out our Show Dates on our website for more info: www.StereoLove.us 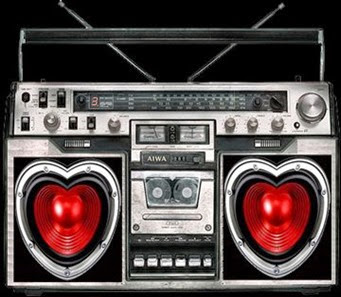 For Booking and More Info about STEREO LOVE: judddrums@aol.com